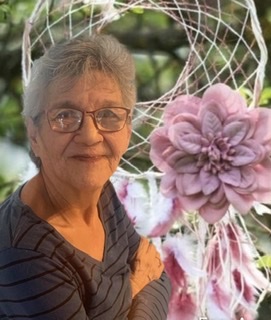 At the Rimouski Hospital, on the 24th of January  2021 at 4:25 am Quebec time, Mrs. Theresa Mary Wilmot Marchand passed away at the age of 65. Rainbow Hawk (spirit name) was born on July 23rd 1955. She was the daughter of the late Barney Wilmot – aq and the late  Maria Annie Jeannie Brisk AKA Marion Wilmot –oq.

Arrangements have been entrusted to Santerre & fils Funeral Home of Nouvelle, Quebec.

The direction and personnel of Santerre & fils Funeral home offer their sincere sympathies to the family.

Visitations will be held at the Listuguj Bingo Hall on Tuesday January 26th from 10:00 am Quebec time until 5:00 pm Quebec time on January 27th. We have a limit of 40 people and need to follow all Covid-19 safety precautions.